How ‘Blade’ And ‘Spawn’ Paved The Way For ‘Black Panther’

Scott Mendelson , CONTRIBUTORI cover the film industry.  Opinions expressed by Forbes Contributors are their own. 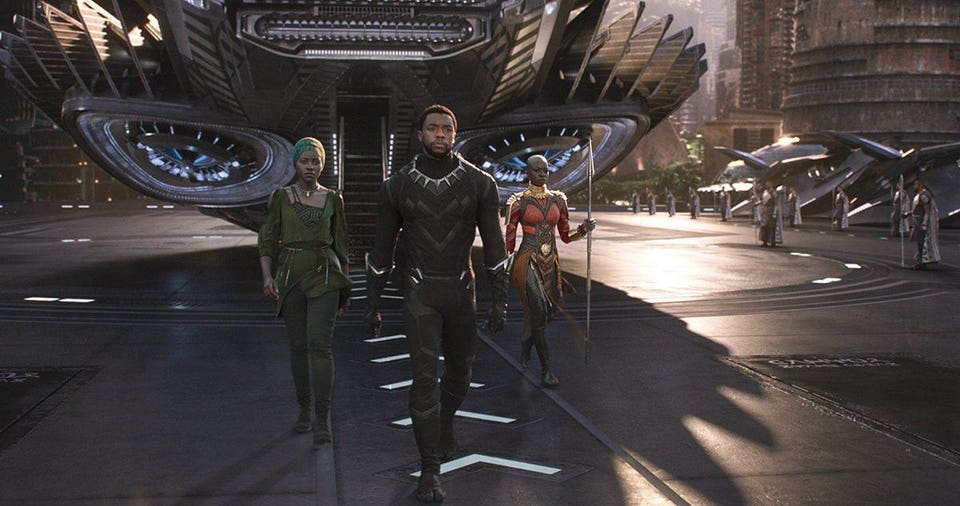 “Superheroes who fight evil in the world… We could use some real X-Men in this town.”

— Homicide: Life on the Street (“Every Mother’s Son”)

The latest word is that Black Panther is outpacing Batman v Superman: Dawn of Justice in advance ticket sales, which means it may be the biggest pre-seller for any superhero movie. Now that does not mean that we’re looking at a Fri-Sun frame above $166 million, but it does mean that I am no longer taking any guestimate as hyperbole. There is going to be much chatter about the Ryan Coogler film as a milestone regarding big-budget superhero movies featuring a black leading man (Chadwick Boseman) and a majority black cast including Michael B. Jordan, Lupita Nyong’o, Danai Gurira, Daniel Kaluuya, Letitia Wright, Angela Bassett and Forest Whitaker. Boseman is not the first black actor to portray a costumed superhero on the silver screen. In fact, there was a period in the mid-to-late 1990s, where the comic book and superhero movies were mostly the domain of actors that were not white or male.

According to Box Office Mojo, there have been 158 comic book adaptations since Superman: The Movie in 1978, counting comic book movies like A History of Violence or Ghost World that are not necessarily about superheroes. Conversely, there have been 122 superhero movies, including quite a few (Darkman comes to mind) that were not based on comic books. They also don’t count the likes of The Matrix or Robocop, even though I do. No matter, of the 158 listed comic book adaptations, 100 of them came after 2003. So, in the first 40 years of modern comic book cinema, the first 25 years made up one-third of the movies.

That includes a lot of non-superhero stuff like Annie, Howard the Duck and Popeye. Heck, from 1978 to 1989, five of the 14 pre-Batman comic adaptations to get a domestic theatrical release were Superman movies, including 1984’s Supergirl. There were 23 such movies between Batman (1989) and Batman and Robin (1997), with 10 of them being Batman movies (including Mask of the Phantasm), Teenage Mutant Ninja Turtles flicks and Crow movies. As comic book movies/pulp superhero movies tried (and arguably failed) to get a foothold as a dominant blockbuster genre (all due respect to The Phantom, The Shadow, Dick Tracy and The Rocketeer), a funny thing happened. Smaller productions from the indie likes of New Line Cinema relative success in their present-tense, of-the-moment action fantasies. We also started to see a handful of superhero movies, original or otherwise, centered not just on black superheroes but often about timely social issues plaguing the black community.

Robert Townsend’s 1993 release The Meteor Man offered a new hero in the form of a do-gooder school teacher who uses powers from a mysterious green meteor to tackle gang violence plaguing his neighborhood. Damon Wayans’ comedic Blankman concerned a nerdy but brilliant wannabe superhero donning a costume to avenge his murdered grandmother and battle the organized crime corrupting his city. Even Shaquille O’Neil’s Steel  (a character initially from the “Reign of Superman” arc from the early 1990’s) was a cheap riff on Iron Man’s origin, where a guilt-ridden weapons maker dons a homemade super suit after his former boss sells his tech to street gangs.

None of these films were terribly big-budget (Meteor Man, which included the likes of Bill Cosby, James Earl Jones and Sinbad, cost $30 million), and you can argue that they were not very good (I will go to bat for Meteor Man). However, they did offer something different from the then-standard superhero fare. Instead of pitting their (white) costumed heroes against larger-than-life foes or costumed supervillains, these (black) superheroes used their powers or skills to fight very real street violence and corruption. The Meteor Man was not trying to save the world from an alien invasion, he just wanted to protect his neighborhood from drugs and drive-by shootings.

The world of these films (and Carl Lumbly’s TV movie-turned-TV series Mantis) was not a fantastical one where colorful heroes battled colorful villains in stylized conflicts with metaphorical real-world meaning. Theirs was the real world where superheroes provided a beacon of hope to citizens dealing with real violence and real poverty that the (white, rich, male) powers-that-be caused or didn’t care enough about to solve. This concept is part of what (thus far) separates CW’s (very good) Black Lightning from the more fantastical adventures in the so-called “Arrowverse.”

Meanwhile, concurrently with these lower-budget and painfully topical superhero wish-fulfillment fantasies, we had the Will Smith/Tommy Lee Jones comic book-based Men in Black series, Antonio Banderas’ (still awesome) The Mask of Zorro and Jet Li’s Black Mask. Right before the transition from B-movie fare to A-level blockbusters, we had five straight “not a white guy” superhero movies in a row, with Spawn, Steel, Mask of Zorro, Blade and Black Mask. Heck, if you count Men in Black, that’s six between the summer of 1997 and the early summer of 1999.

It was New Line’s Spawn in 1997 ($87 million worldwide) and New Line’s Blade ($131m) in 1998, both present-tense comic book superhero movies based on characters that kids of that era had heard of and/or liked, which showed that non-Batman superhero films could be at least somewhat profitable. Not only did Michael Jai White’s Spawn come before Blade, but it was explicitly sold on the popularity of its Todd McFarlane-penned source material. Conversely, while it’s the superior picture, Blade was sold as Wesley Snipes vampire action movie that happened to be based on a Marvel comic book.

So, what happened next? Well, for better or worse, we got the Wachowskis’ The Matrix (an original sci-fi action fantasy rooted in superhero and anime mythos) in early 1999, Bryan Singer’s X-Men in July 2000 (which earned $297 million worldwide on a $75m budget) and then Sam Raimi’s Spider-Man ($821m worldwide) in the summer of 2002. The latter two especially were proof at last that A) technology had caught up with the four-color source material and B) comic book superhero movies could be A-level blockbusters with A-level box office grosses.

Once that happened, Hollywood started giving us big-budget, PG-13 superhero movies mostly starring young white dudes. Between Spider-Man and now, we got a deluge of big-budget superhero movies starring white heroes fighting fantastical threats while the likes of Blade and Spawn got put on the backburner.

We did get two female-led superhero movies, specifically Halle Berry’s Catwoman in 2004 and Elektra in 2005. Both were middling efforts whose failures were used to cross out the potential of female superhero movies even while the white male heroes kept getting reboots. Scarlett Johansson’s Black Widow has supported five MCU movies and may get a solo flick in a few years, but I digress.

Halle Berry’s Catwoman was the most expensive black-led comic book superhero movie until Will Smith’s Suicide Squad. However, spending $100 million on a Catwoman spinoff with no connection to Batman was glorified sabotage.

Of note, Wesley Snipes finished his Blade trilogy, even if Blade: Trinity was intended as a backdoor pilot for Ryan Reynolds and Jessica Biel. We got one more Zorro movie in late 2005. Amusingly enough, Will Smith’s wholly original Hancock ($624 million in 2008) remains the highest-grossing live-action “not based on anything” superhero movie, even out-grossing Iron Man ($585m) that summer.

But even if you count Suicide Squad (which stars Will Smith and Viola Davis alongside Margot Robbie and Joel Kinneman), Black Panther is the first solo black-led comic book superhero movie since Blade: Trinity back in 2004. Walt Disney’s Black Panther is the first minority-led costumed solo superhero movie since Sony’s Hancock, and before that since Sony’s The Legend of Zorro back in 2005. Because once comic book superhero movies became the biggest and most popular kind of big-budget would-be blockbuster, they became an almost exclusively white man’s domain.

Like the women (of all races) fired from the workforce and tossed back into the kitchens at the end of World War II, black superheroes fighting both fantastical threats and real-world violence were tossed aside once the genre became safe for big-budgets and four-quadrant aspirations. Aside from Warner Bros./Time Warner Inc.’s Batman franchise, it was Spawn and Blade that kept the fantastical superhero movie alive. After X-Men and Spider-Man, the genre became the near-exclusive domain of white guys named Chris battling world-imperiling threats which doubled as post-9/11 metaphors.

It is little different from the animated feature or the romantic comedy. Once Hollywood realized that dude-centric toons (like Shrek) and bromance-centric romcoms (like Super Bad) could make big bucks, the other variations became endangered species. Movies like Brave, Trainwreck or Think Like a Man did not use to be as huge a deal. I’d like the think that Black Panther will be a teachable moment in the same (relative) vein as Wonder Woman. However, there have been so many teachable moments ignored over the last decade. Yet the default somehow always returns to the idea that a white male-centric hero’s journey written and directed by white dudes was the safest financial bet.

It was only after the genre proved it could create blockbusters that a movie like Black Panther became a once-in-a-lifetime event. Black superheroes paved the way for the current superhero movie boom only to be tossed aside once comic book superhero movies became safe for white movie stars and huge budgets. Black Panther isn’t a sign of progress, but rather a return to what once was the status quo.

IMDB by Gary Collinson It looks like Black Dynamite could be set[...]

“Michael Jai White gets straight into the world of black Hollywood[...]

“This movie swooped in like a film ninja as it[...]

We're currently offline. Send us an email and we'll get back to you.

Type and press Enter to search